We are excited to announce our new products to mark the 100th anniversary of the Easter Rising – Signs of Rebellion is a beautiful memento which you can buy in just a couple of clicks in poster form or as a handsome framed picture. The picture would make a super gift for a friend or relative living away from home. We will ship it anywhere in the world.

We also created a series of Dublin Street Signs which are foamex replicas of Dublin street signs bearing landmarks from this pivotal episode in the struggle for independence. 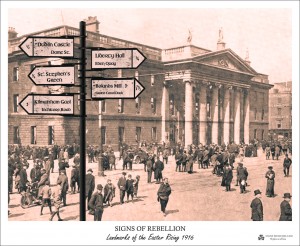 Dozens of places in Dublin city centre are associated with the Easter Rising. We’ve chosen five of the most significant. Here’s why –

Liberty Hall – Headquarters of the Irish Transport and General Workers Union (ITGWU) and the Irish Citizen Army, the leader of which was James Connolly, commandant of the Dublin Brigade during the rebellion.  The Proclamation of the Irish Republic was printed in the basement of Liberty Hall on Easter Sunday, 1916.

Dublin Castle – The seat of British rule in Ireland. The rebels attempted to storm the castle but were unsuccessful, occupying for a short time the adjacent City Hall.  The first victim of the Rising was an unarmed policeman, James O’Brien from Co. Limerick, who was on duty at the Cork Street gate of the Castle when the rebels made their attack.

St Stephen’s Green – the rebel position at St Stephen’s Green, held by the Citizen Army under Michael Mallin, with Countess Markievicz second in command, was abandoned on Easter Tuesday due to the placing of snipers in the Shelbourne Hotel and surrounding buildings. The unit retreated to the Royal College of Surgeons building where they remained for the rest of the week.

Boland’s Mill – The job of the rebels positioned here under Eamon de Valera was to control the south-eastern approach to the city centre. On Wednesday 26th April, British forces assaulted the Mill using field artillery from Trinity College and shells fired from the patrol vessel, the Helga, situated on the Liffey. The unit followed Pearse’s order to surrender on Friday 28th April.

Kilmainham Gaol – In the Stonebreakers yard at Kilmainham Gaol, 15 of the rebels (including all seven signatories of the Proclamation) were executed by a 12-man firing squad between 3rd and 12th May 1916. These executions were seen as pivotal in changing the attitude of ordinary citizens to the Rising and the rebels from animosity to sympathy.