St Patrick is associated with so many places in Ireland, narrowing it down to just five was a challenge. Countless villages and townlands have a well or a cross or a church with some handed down connection with the man who, in the fifth century, reputedly brought Christianity to the Irish. I’m sure you know of one or two! So I’ve gone for the significant places for St Patrick, during his lifetime and today.

Slemish is a mountain in County Antrim, Northern Ireland. It lies a few miles east of Ballymena, in the townland of Carnstroan. Tradition holds that Saint Patrick, enslaved as a youth, was brought to this area in the 5th century and tended sheep herds on Slemish. It is said that it was during this time that he found God. In a vision, he was encouraged to escape and return to Britain.

The mountain rises to 1500 feet (437 metres) above the surrounding plain, and it is actually the central core of an extinct volcano. Many people hike the mountain on St Patrick’s Day.

Croagh Patrick is a mountain in County Mayo overlooking Clew Bay. Considered a holy mountain, it has long been associated with St Patrick, though its sacred status goes back to pagan times. It is reputed that Patrick fasted for forty days in 441 AD on the summit of the mountain and the custom has been faithfully handed down from generation to generation. Climbing the 764-metre (2,507 ft) high ‘Reek’, as it is known, is a common form of pilgrimage.

St Patrick is associated with a well which stood next to the site of the cathedral at which he reputedly baptised converts around 450 AD. The church of St Patrick built on this site became a cathedral in 1224. St Patrick’s Cathedral is today the national cathedral of the Church of Ireland (a church of the Anglican communion) and a popular tourist attraction. It is still Ireland’s largest cathedral.

Reputedly the world’s oldest St Patrick’s Day parade, the New York parade first took place more than 250 years ago, on March 17, 1762. Since then, Irish people and people of Irish extraction march along Fifth Avenue, starting at 44th Street and finishing at 86th Street on 17th March every year passing by venerable New York attractions such as St. Patrick’s Cathedral and Central Park.

St Patrick is said to have been buried in 461 AD on a site in Downpatrick where the Church of Ireland cathedral now stands. The hill where the burials took place became a traditional burial place, and there are records of monasteries existing there from the 6th century. Parts of the 12th century Benedictine monastery make up the present building.

Jamie Dornan always had the Holywood thing going on

Posted by Amit Wadhwa at 15:34 | Uncategorized | Leave a comment 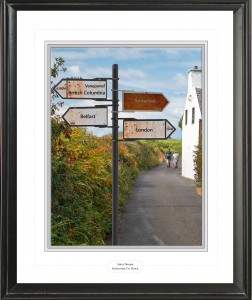 Fifty Shades of Grey star Jamie Dornan is from Holywood. Holywood, County Down, that is, a small town close to Belfast, Northern Ireland. Here’s his Signs from Ireland picture explained.

Vancouver Where Fifty Shades of Grey was filmed and where his daughter Dulcie was born just weeks into shooting the film adaptation of one of the biggest- selling books of all time.

Somerset Where he got married to his wife Amelia Warner.

Belfast Dornan played serial killer Paul Spector in the BBC drama set in Belfast The Fall, co-starring Gillian Anderson. It’s also where he went to secondary school – Methodist College . He boarded there following the untimely death of his mother from cancer.

London Where headed to pursue modelling in 2002, dropping out of a marketing degree at Teeside University in Northern England and where he now lives (for part of the year at least).